Birdingbury is a parish of a little over 1,000 acres.   It is a long, narrow parish, nearly three miles from north to south and just over a mile, east to west, at its widest point.   The village itself is at the north end of the parish, in a loop of the River Leam.   It lies about six miles south-west of Rugby, nine miles south-east of Coventry, seven miles east of Leamington Spa and four miles north of Southam (click here for Google Map).   Its parish neighbours, from north clockwise, are Bourton and Draycote, Leamington Hastings, Stockton, Long Itchington, Marton and Frankton.   The parish mainly occupies a north-south ridge of hard, heavy clay layered with limestone which slopes steeply down to the west.   On either side of the ridge there are streams which flow north draining all of the parish land into the River Leam.   These two streams and the river form eastern, northern and part of the western boundaries. The ridge reaches 345 feet (105m.) on the Stockton Road half a mile from the Boat Inn and the lowest point of the parish is at 220 feet (67m.) where the River Leam runs under the railway viaduct.

There are around 280 adults living in Birdingbury today with about 60 children. About half the village inhabitants are between thirty and sixty.  Although about a quarter have been in the village for less than five years nearly another quarter have lived here for more than thirty years and there are a few whose families have lived in Birdingbury for several generations. Many people have moved within the village, some of them several times.

There are 137 dwellings in the parish of which 113 lie within the village envelope.  Of these nearly three-quarters were built in the last sixty years.

Very few people now work in agriculture although there is some other employment within the village, including road haulage and materials handling, services to business management, light engineering and work at the Boat Inn.

A few work from home and Birdingbury is a good centre for those who need to travel out.  The majority commute to local towns with a few going as far as London.

Farming in Birdingbury continues to be a mixture of arable and grassland.  While some of the land is now owned and farmed from outside the parish much is still divided between the farms established at the time of enclosure (1804).  Two of the older farmsteads remain, one is a dairy farm and the other has sheep and arable.  One other traditional farmstead lies just outside the boundary although most of its land is within the parish.  One new farmstead has been built on the north side of the village with its land extending into Frankton and Bourton parishes.

There are several public footpaths which link Birdingbury, cross-country, with nearby settlements.  The Leamington-Rugby Sustrans Cycleway passes through the village, along Main Street, and joins the old railway line at Birdingbury Bridge; from there the cycleway gives access to Draycote Water Country Park and Rugby.  Some villagers cycle frequently and many sports cyclists pass through the village, especially at week-ends.

Most journeys are made by motor vehicle.  There is a bus service, Mondays to Saturdays, to and from Southam, Leamington, Rugby and Coventry.  Otherwise villagers are dependent upon private transport to meet their needs, with the nearest post office and shop being 2½ miles away in Long Itchington and the nearest petrol station over three miles.  The nearest supermarket and range of shops are in Southam, five miles away, and the nearest rail station seven miles away in Rugby.  The local infant school is just over a mile away and the nearest primary just over four miles. Most other services are at similar distances from the village.  Some shops and services travel to the village.

Birdingbury has a Parish Council with five Councillors.  It is just inside the southern border of Rugby Borough Council’s area, so that is the body which provides most local government services.  Birdingbury is linked with four other parishes to form the Leam Valley Borough Council ward.  Other services are provided by Warwickshire County Council.  Birdingbury is currently in the Kenilworth and Southam parliamentary constituency.

In 1974 the Church in Birdingbury ceased to be associated with Marton and became linked with Leamington Hastings.  This developed into the Leam Valley Group but since 2005 Birdingbury has been part of the Draycote 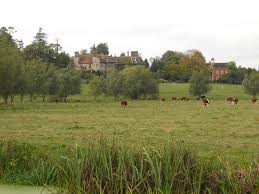 Group of Parishes which, besides Birdingbury, comprises Stretton, Princethorpe, Frankton, Bourton and Draycote.

In some ways Birdingbury is an unusual place.  Neither the Hall nor the Church, the Rectory nor many of the oldest buildings can easily be seen by a passer-by.  There is no village green nor any particular feature to catch the attention.   Most of the houses facing the through roads are modern but set well back so that the impression is one of space with wide green verges and trees.  Perhaps this is why so many strangers comment ‘what an attractive village you live in.’